Ubuntu for Android demoed on a Nexus 4, shows the need for the Ubuntu Edge 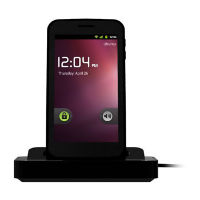 With all the news about the Ubuntu Edge and Canonical's plans for Ubuntu Touch to be the future of convergent computing, you may have forgotten that Canonical is still working on Ubuntu for Android. Ubuntu for Android is essentially the same idea as Ubuntu Touch, where you get a full Ubuntu desktop environment when you dock a mobile device, but with the difference that the handset runs Android, not Ubuntu Touch.
Canonical engineer Victor Palau is showing off Ubuntu for Android running through a Nexus 4, which is hooked up to an external monitor via a Slimport HDMI cable. As you can see in the video, it does give access to full Ubuntu, complete with workspaces, and the Ubuntu Software Centre. But, as you can also see, the Nexus 4 struggles with the system. Windows stutter when moving, and overall performance is slow.
This could very well be partially due to the system not being optimized properly for the hardware in a Nexus 4, but part of it could simply be that the Nexus 4 isn't powerful enough. The Ubuntu Edge is planned to have the "fastest available" processor and "at least 4GB of RAM", while the Nexus 4 has a year old Snapdragon S4 Pro and just 2GB of RAM. Now we can see that "convergence hump" that Mark Shuttleworth talked about yesterday.
http://www.youtube.com/watch?v=bk9-v8Sl4yU