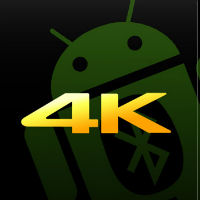 You may have thought that smartphone displays would be stopping at 1080p, and tablets may take a while to move past the 2560x1600, but some new code inside Android 4.3 indicates that Google is getting ready to offer support for crazy high pixel density as well as 4K displays. Apparently, Android 4.3 has added support for XXXHDPI, which is for screens with an approximate DPI of 640.
Let's roll back a bit to give some context there. Android smartphones started out in the Medium DPI (MDPI) range of ~160ppi, which is what you'd find on the T-Mobile G1. Eventually, we moved up to HDPI (~240ppi), which was the Nexus S type display. We then blew right through the XHDPI range (~320ppi) which were essentially the 720p displays on devices like the Nexus 4, and we are now in the world of the XXHDPI range (~480ppi) which you'll find on 1080p displays like the HTC One.
So, the idea of an XXXHDPI display is pretty crazy. Of course, in all likelihood the reason this resolution support has been added isn't for high-res smartphones or tablets, but for 4K TVs, and for Android's move past mobile and into traditional laptops and desktops. We've already heard Sundar Pichai talking about big things coming to Google TV this year, and 4K support would be a big addition for the platform.
#http://www.phonearena.com/
Posted by Unknown at 12:43 PM