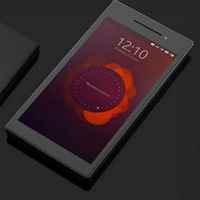 Reddit's Ask Me Anything (AMA) events have been pretty amazing ways to find out information on topics that you care about; and right now, Canonical founder Mark Shuttleworth is holding an AMA about the Ubuntu Edge. So, if you have a question for him, just head over to Reddit and ask.

The AMA started just over an hour ago, and already Shuttleworth has said that the Ubuntu Edge will be "an annual process by which the previous generation backers get to vote on the spec for the next generation of Edge." Ultimately, Shuttleworth says that "the real idea we're trying to express is that a community can make better decisions than a single person." Additionally, Canonical will be looking into using "all-open hardware" in future generations of Edge, and is hoping to be able to crowd-source the design of the Ubuntu Edge in 2015.
Canonical will be releasing the physical dimensions as soon as they are final so users can 3D print accessories. And, there has been work put into dealing with heat issues in such a powerful device that would double as a desktop computer. The key, according to Shuttleworth, is to provide "all-out for performance to get over the convergence hump - i.e. deliver a device that gives a good enough desktop experience when you hook it up via HDMI and a bluetooth keyboard", but not have the device be too hot when in your hand or pocket.
On the subject of battery life, Shuttleworth dropped the extremely interesting idea that Canonical wants to "blaze a trail with silicon anode batteries." Silicon anode batteries use silicon nanowires to build a battery that has been said can last about 40% longer than current batteries, and survive as many as 4x as many recharge cycles.
On carrier customizations, Shuttleworth says Canonical has proposed that carriers/manufacturers are responsible for hardware drivers, Canonical is responsible for software updates, and there is a customization layer (which Pat McGowan explained for us) which would allow for customization of content on the device and themes, but not customization of the core OS.
Shuttleworth has confirmed that the first generation Ubuntu Edge will not include wireless charging because the team decided it would make the device too thick. However, future generations of the Edge will likely include wireless charging options.
On the question of why an iOS user might want to purchase an Ubuntu device, Shuttleworth answered:
If you're interested in convergence between phone and PC, we'll do that first and imo best. If you're interested in accelerating the movement of new tech into the mainstream, the Edge is a very interesting new way to signal to Appe what you consider cool in hardware (and software).
Shuttleworth has confirmed that Ubuntu Edge will feature unlocked LTE that will support LTE in both US and Europe, but because "the spectrum is just too fragmented at the moment", so it won't be able to have worldwide LTE support.
Canonical is working with game developers to bring top notch games to mobile and desktop (which of course will be the same with the Edge), and Shuttleworth is excited for the potential of gaming. Of course, many people have been excited for the "potential" of gaming on Linux for a long time. More and more games are coming to Ubuntu, but the ecosystem is still nowhere near as impressive as Windows, or even Mac.
There was even a bit of a tease that Canonical may be working on its own wearable devices, when Shuttleworth said, "What better way to prototype wearables than with a mobile PC to power them?" We won't say this is an admission that there is an Ubuntu wearable in the works, but knowing the team at Canonical, we're sure that the idea has been bounced around, at the very least.
Conclusion
There is a lot more information in the AMA, but we're pretty sure we caught all of the highlights. As usual, the aims of Shuttleworth and Canonical are sky high. We had known that the team was working on converging mobile and traditional desktop devices, but the ideas behind completely crowd-sourcing the process of designing and building devices is incredibly interesting.
There is still a fairly long way to go in the Ubuntu Edge funding, but it has managed to raise over $6 million so far. That is less than 20% of the final goal of $32 million, but it has only been 3 days, and there is another 28 days to go in the campaign. The Canonical team obviously are looking for ways to keep interest in the project high including this AMA and in adding more funding tiers, so we wouldn't be surprised if the goal is reached. And, if it is, that will go a long way to keeping alive Shuttleworth's idea to make this an annual project with the Ubuntu Edge handsets.
#http://www.phonearena.com
Posted by Unknown at 12:48 PM