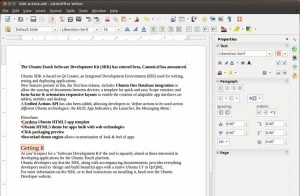 LibreOffice 4.1, which brings with it an experimental new sidebar, has been officially released.
The update also features �a large number of improvements in the area of document compatibility�.
These improvements aim to make the sharing of documents with those using other office suites, most notably Microsoft Office, better by �retaining the original layout and contents�.
Other new features and changes include:
This release comes exactly one week after the final release of the 3.6.x series was issued.
LibreOffice 4.1 is a free download available for Linux, Windows and Mac OS X.

Don�t fancy installing LibreOffice 4.1 manually? If you�re running Ubuntu 12.04, 13.04 or 13.10 you can add the LibreOffice � test builds and backports� PPA to upgrade to this release using Ubuntu�s Update Manager.
Posted by Unknown at 12:57 PM