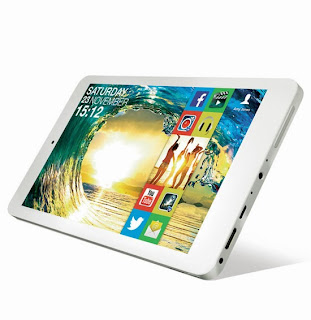 With just 70 days until Christmas, Argos has released its own budget and family-friendly tablet that the retailer hopes will pop up on Christmas lists. See also: The top 10 best tablets: What's the best tablet you can buy in 2013?
Priced at �99.99, digital, catalogue and high-street retailer Argos' MyTablet is now one of the least expensive tablet on the market, undercutting similar low-cost models including the Tesco Hudl (�119), Google's Nexus 7 (�199), Apple's iPad mini (�269) and the Amazon Kindle Fire HD (�159).
The 7-inch MyTablet features 8GB of storage and runs Google's Android Jelly Bean 4.2.2 operating system. It also comes pre-loaded with 19 free games and apps, including the Argos app, BBC iPlayer, Facebook, Twitter and Angry Birds.
Argos says the tablet was designed with families in mind with built-in parental controls for younger users, but still offer all the functionality of a comprehensive tablet.
The MyTablet is available in pink or silver metal cases and has a built-in 2 Mp rear-facing camera, as well as a front-facing camera. It's also Wi-Fi-enabled, Bluetooth capable and features a 1.6GHz dual core processor and 1024x600 resolution LCD glass screen. The device's memory can also be expanded to 32GB with a mini SD card.
Joe Walden, Managing Director of Argos said, "Millions of people bought a tablet last year but there's still around 75 per cent of the UK population who do not yet own one. We know that tablets will feature heavily on Christmas lists again this year."
�Customers have never had such a good quality tablet at such an affordable price,� Walden continued. �At just �99.99 the Argos MyTablet is highly competitive with a great specification, and fits neatly in the range of tablets we have on offer.�
The MyTablet comes on the heels of a similar low-cost tablet from Tesco released earlier this fall, the �119 Hudl.
On sale Wednesday, 16th October, Argos' MyTablet can be purchased at argos.co.uk, via the Argos app or in stores.

http://www.pcadvisor.co.uk/news/tablets/3473754/new-argos-tablet-budget-family-friendly-option/
Posted by Unknown at 11:59 AM