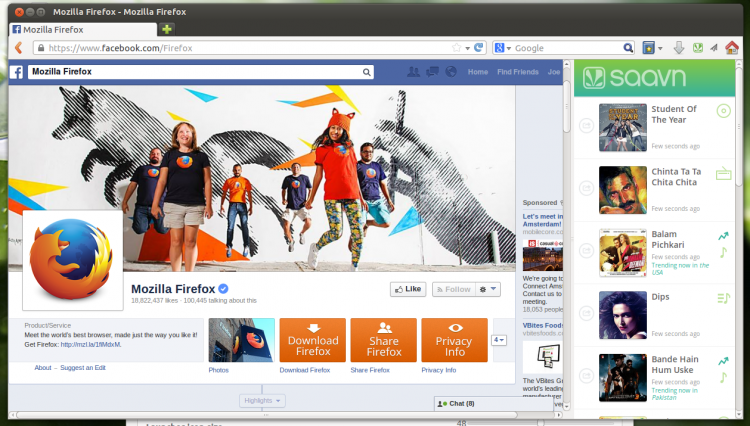 Firefox 27 has been released by Mozilla.
The latest version of the popular open-source browser comes with a major update to the Firefox Social feature introduced back in 2012. Originally supporting just Facebook, the selection was later expanded to include little known services like Cliqz and Mixi.
Today�s update adds support for bookmarking site Delicious (trivia: after leaving OMG! Ubuntu! Benjamin Humphrey worked on its redesign) and Saavn, a music service based in India. Furthermore, the Social API is now able to connect to more than one service at a time � a change that should go some way to persuading developers to give integration a whirl.
Social shenanigans aside, Mozilla has also added support for the latest SPDY 3.1 protocol, and TLS 1.1 and 1.2, helping to beef up the browser�s networking prowess.
One lone Linux-specific change, a fix for content rendering issues with Azure/Skia, also features.
Firefox 27 is a free download, available from today from the Mozilla website. Ubuntu users will receive the update through the Software Updater utility at some point in the next few days.
http://www.omgubuntu.co.uk/2014/02/firefox-27-released-available-downlod
Posted by Unknown at 7:59 AM