When Sabayon 8 was released last month � something told me I should grab both the KDE and GNOME images. When it comes to KDE, I�m so much in my comfort zone with openSUSE, that any other implementation really ticks me off. The only other KDE implementation that really pleased me in the last couple of years was the Rosa UI layer in Mandriva 2011 � but I�m not sure if we�ll see a Mandriva 2012.
Anyway, as I write, I�ve been using Sabayon 8 GNOME version on and off for a few weeks now. You ask, why on and off? Well, I really dig the bells and whistles of GNOME 3; it�s just that when I need to get work done, I need to get back to my KDE � so I hit a reboot!
What exactly is so cool about the Sabayon implementation of GNOME 3.2 desktop environment is that they have just ended up making multitasking that much more easier compared to the vanilla GNOME Shell available in other distros. More about that later! 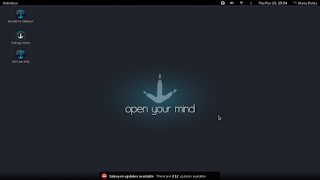 The ISOs (both KDE and GNOME) are about 1.5 gigs each. What really pleased me was they are hybrid ISOs � and that makes burning the image to a USB as simple as running the following dd command as root (no unetbootin, no USB Creator required):
�where /dev/sdb is my USB device (yours might be different).
The boot menu comes with loads of options � if fact, you can press the down arrow key to see more. I chose to get on with the default selected option. Booting off of USB took near about the same time it takes any other distro.
On the desktop you�ll notice the first GNOME Shell customisations the Sabayon team delivers. The clock has been moved to its old right-hand side position on the top panel (like we had in GNOME 2.x, instead of a centre position that we now have in GNOME 3.x). As always, Sabayon chose to go with a dark-coloured wallpaper � but then vanilla GNOME 3's overall themeing is also black, so it goes with it. The wallpaper has the standard �open your mind� statement below the project logo dead centre on the screen. I really dig that!
There are three icons on this desktop: install Sabayon, donate, and Get Help. The latter two icons open an instance of Chromium (version 17), where Get Help takes you to the Web-based IRC window of #sabayonchannel. Gotta say this is a very intuitive addition to direct people straight to the support channel in case they are stuck somewhere. This, of course, provided the Internet is working; which in my case wasn�t, because it didn�t detect my Wi-Fi. The only option the NetworkManager suggested I should use was to plug in a wire. Who does that on a laptop?
Yes, mine is a Broadcom chip (that comes with my Samsung RV509) � but it has worked out of the box since the driver was integrated in kernel 2.6.38. So seeing it not working �out of the box� was bit of a shock. A bug?
Back to the desktop, the best thing to do is install and see where it leads me. But before that, something needs to be said about the icon placements. After logging in to the desktop, the top one � �Install to Hard Drive� � by default, is partially hidden under the top panel. However, the moment you click one anything the icons adjust and move downwards to align properly. Minor visual glitch � but should have been taken care of.
Installing it is a no-brainier, especially if you�ve ever used the Anaconda installer (courtesy, Fedora and co.). And there were no bugs to report in this area, but for one minor issue. The progress bar went from 0 to 100 very quickly � and then sat right there for what seemed like an eternity.
Anyway, while it was sitting there, I utilised the time to explore the software stack of the OS. The application dock, by default, only has icons for Evolution, Empathy, Shotwell, LibreOffice Writer, and Nautilus (in that particular order). Typically, you�d expect at least the browser to be present somewhere there � strange set of defaults I�d say. 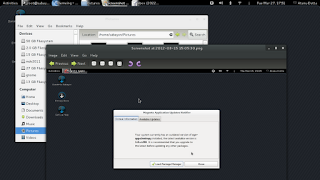 This time around, the Install icon is replaced by the Entropy Store icon. Whoa, a store? Will come back to that later. First, let�s fix the Wi-Fi.
Oh my, it said the package manager is looking for updates and returned within moments to report that my system is up to date? Strange. It should have reported it wasn�t able to connect to the repository list or something similar. 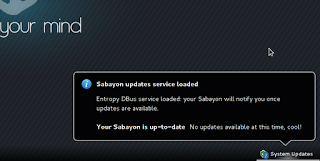 Anyway� Connect the network wire, and hit the Get Help icon to launch the IRC chat. Maybe the time of the day when I had checked in everyone was asleep. Googling brought me to this thread on Sabayon Forum. Although this user was stuck with a worse kind of Broadcom wireless chip, my problem was solved by following the directives menitioned in this wiki � somehow I didn�t get there directly from Google, but via the forum post:
�and reboot. Wireless is back, although it takes 10 times more time to pick up an IP over DHCP compared to other distros. At least it works, eh?

Now that the Wi-Fi was in order, it was time to hit the Entropy Store. Wait, before that the system indicated I should update the system. And turns out I had like 212 updates.
Anyway, clicking the notification brought up the Entropy Store. Selected all and hit update. This is where I realised out how slow this package manager�s backend is compared to apt-get, urpmi, yum� heck, even zypper seems to be on steroids compared to this one. To install all those updates of probably four or five hundred megs it easily took more than a couple of hours.
This was a good time to check out what the rest of the system had for me. First, setup the Online Accounts. They should have called it Online Account (without the s) because the only option was Google � I thought Twitter was also added to the list in GNOME 3.2; nonetheless, it wasn�t there. So be it. I set up Google for Mail, Calender Contacts, Chat, and Documents. While Google mail, calender and contacts were now available from Evolution, I noticed a separate GNOME app for contacts that kept indicating how I should connect to an account. Couldn�t really figure out this puzzle. 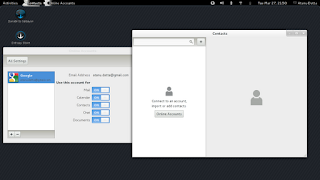 Also, it would have been great if Empathy picked up the Google account for chat automatically. Alas, up on it�s first launch it still asked me to set up account(s). I�m still not sure where I should check the documents synchronication available in the Online Accounts application. Anyway, for all I know these actually might be GNOME issues � but as I�m not a regular user, I can�t pin-point.
Either way, I was simply picking on them � I don�t really use an email, chat or contacts client to communicate. The browser is enough for me.
Meanwhile, the absolute killer customisation that the Sabayon team has done with GNOME is what you can see in the following screenshot.

As you can see, all the currently open application windows are listed on the top panel � compared to availability of only the currently-focussed one in case of default GNOME Shell or Unity. This is indeed a nice and essential hack by the Sabayon team that eases the job of multitasking between apps that much easier. Now, you know why the clock�s been moved to the RHS position :-)

Gotta say, the set of apps the distro comes with are pretty adequate. Some of the handy ones by category are as under:
SOURCE#http://www.linuxforu.com/2012/03/sabayon-8-review-multitasking-optimised-gnome-3/